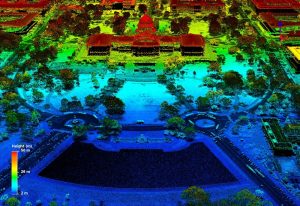 Roy Wright, the Federal Emergency Management Agency executive in charge of the National Dam Safety Program and the National Flood Insurance Program, was a long way from Oroville, Calif. But the fate of the nation’s highest dam was top of mind as he addressed the International Lidar Mapping Forum on Monday, Feb. 13 in Denver, Colo.
A series of torrential rains had pushed California’s second-largest reservoir to the brink. Erosion of a 48-year-old emergency spillway threatened the dam’s collapse. Rather than flowing obediently to the lettuce fields of the San Joaquin Valley and through the faucets of Los Angeles, its waters would submerge Oroville, Yuba City and a whole lot more. Nearly 200,000 people had been evacuated as he spoke.
“We’re out there in the state of California with drones and other ways to understand how the earth is changing in real-time,” he said.
Over the last decade, 73 percent of major U.S. disaster declarations were caused by floods, Wright said. FEMA uses lidar data immediately after the disaster and partners with the National Geospatial Agency and others to get more data in the aftermath.
“We use it to drive that initial response as well as the kinds of decisions locals will make in a steady-state environment to make sure they withstand the next event,” he said.
Lidar mapping can’t lift hundreds of tons of rock and dump it into gashes torn into an emergency spillway. But its ability to help people and policymakers understand risk and help reduce losses mean it can and should play a much bigger role than it does today, he said.
“You all know how valuable digital elevation data are,” Wright said. “But let me tell you something: decision makers do not understand the value of digital elevation data. They don’t know what they’re missing.”
FEMA itself wasn’t a terribly early adopter. It wasn’t until about 15 years ago that the agency added a second color – blue – to its black-and-white flood maps, he said. Even that didn’t really resonate, he said.
“When we tell them where the water will go, they scratch their head and say, ‘Isn’t that interesting,’” Wright said. “When we tell them how deep the water will go, they say, ‘Maybe I should do something about that.’
“But with 3D elevation maps that shows water up against their front door, they say, “What can I do about that – now?”
To get to that point without an expensive home visit by a surveyor, Wright says FEMA needs to know the elevation of the base floor of the house. That’s what the National Flood Insurance Program needs to price insurance accordingly – no small detail for an organization inundated in some $25 billion in debt after hurricanes Rita, Anita and Superstorm Sandy.
Wright’s official title at FEMA is Deputy Associate Administrator for Insurance and Mitigation. Mapping is front and center to his work, he said.
“We spend more money on the acquisition of elevation data than any other civilian agency in the federal government,” he said. Still, he added, there’s much more to be done. The Oroville Dam mapping data that was good enough 10 days ago, he said “is not good enough today.”
Lowering costs and speeding the turnaround of data that meets the USGS QL2 standard FEMA needs will be key to expanding overage across much wider expanses of the United States, he said, “and from the technical perspective you all can do that.” But just as importantly, the industry and the customers who depend on it must make a stronger case for the value of high-quality digital elevation mapping.
“We as a community need to come around to how to make this case in pure economic terms,” Wright said, and in ways that go beyond citing a study that showed every dollar invested in lidar elevation returns $4.50. “That number alone won’t get us down the road.”
Source:http://www.spar3d.com/blogs/education-events/fema-flood-chief-expanding-lidars-reach-boils-cost-quality-communicating/