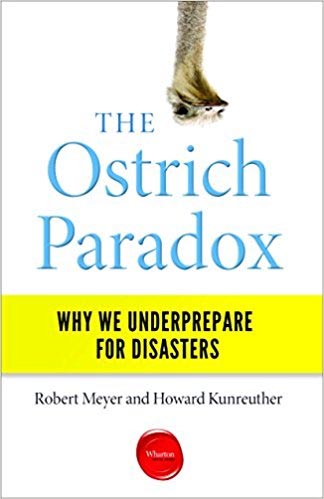 The Ostrich Paradox; Why We Underprepare for Disasters. By Robert Meyer and Howard Kunreuther

Reviewed by Edward A. Thomas Esq., President of the Natural Hazards Mitigation Association.

This is a short, concise and extremely well written book which sets out a simple and easy to understand methodology of evaluating actions, policies and procedures so as to determine if they will actually work so as to provide Disaster Risk Reduction. The book is published by the Wharton School and authored by two exceptionally qualified Professors from Wharton, who have produces a number of equally excellent articles and books in the past relating to Disaster Risk Reduction.

The authors begin by clarifying that as they use the “Ostrich Paradox” as a metaphor, it does not deal with the characterization of the Ostrich as a silly creature who hides its head in the sand to escape problems. Rather they wish us to consider the Ostrich as a wily “escape artist” who uses speed and other attributes to make up for its inability to fly. So too they suggest we humans mist make up for our severe cognitive biases to overcome the disasters of the future.

The book is broken into two major parts:

Part 1 provides an extraordinarily concise and easily understood explanation of why the human mind has such a difficult time preparing for low probability but high consequence events. Those mental limitations are described as: a) the Myopia Bias; b) the Amnesia Bias; c) the Optimism Bias; d) the Inertia Bias; e) the Simplification Bias; and f) the Herding Bias. All these mental human limitations will be all too familiar in concept if not by the nomenclature provided in the book to those of us who have attempted to craft and sell programs designed to build more safely today to avoid disasters in the future. The limitations are presented in a manner which may well leave the reader quite disheartened as to the possibility of ever achieving any sort of long term solution to our growing toll of disaster losses caused by the quite foreseeable processes of nature.

However, in Part II the authors propose a methodology of evaluating societal actions for dealing with disaster losses: the conduct of a “Behavioral Risk Audit.” The audit would consist of an analysis of the six major human mental biased identified in Part I; reviewing the impact of that bias on the issue in question, including specific manifestation of that bias in the real world and then developing a remedy for the bias and the manifestation of the bias. The authors provide a specific example of such an audit in a review of the problem of reducing future flood losses.

In addition the authors provide principles for dealing with the many threats which will inevitably increase disasters of the future including climate change, and sea level rise. The principles are splendid and will work if implemented: a) commit to long term protective planning as a major priority;

The authors also provide us with specific strategies for better Disaster Risk Reduction decision-making, all familiar to most of us: enforcing better standards including building codes and zoning, tax incentives, buyouts for relocating homes for hazardous locations. The book also notes an often overlooked aspect of Disaster Risk Reduction: the problem of affordability. The author’s solution is a system of means tested subsidies.

This book is a must read for its truly concise and brilliant explanation of why it is just so darn difficult to persuade our fellow humans to invest in solutions to solve low probability, high consequence events. Its method of analyzing solutions to those human mental biases, the conduct of a risk audit, is interesting and thought provoking.

However, the book’s proposed solutions do seem require further explanation in two ways:

Summary Review: All-in-all an absolutely must read for all who are trying to achieve Disaster Risk Reduction.

Reviewed by Edward A. Thomas Esq.,