In granting the award, NHMA cited Howard’s lifetime of work to reduce disaster losses and create safer communities. The award reads in part: 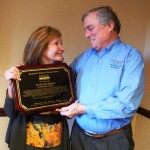 Ms. Howard was appointed as Federal Insurance Administrator at the Federal Emergency Management Agency in March 1998 by President Bill Clinton. Serving as the administrator of the flood program, she was responsible for managing the more than $523 billion of flood insurance in force in the National Flood Insurance Program.

Prior to her tenure at FEMA, she served as a gubernatorial appointee to head the Texas Department of Insurance as chief insurance regulator for the State of Texas and as a member of the National Association of Insurance Commissioners. She received a law degree from the University of Texas School of Law in Austin, a master’s in public administration from East Texas State University, and a BS in education from Abilene Christian University in Abilene.